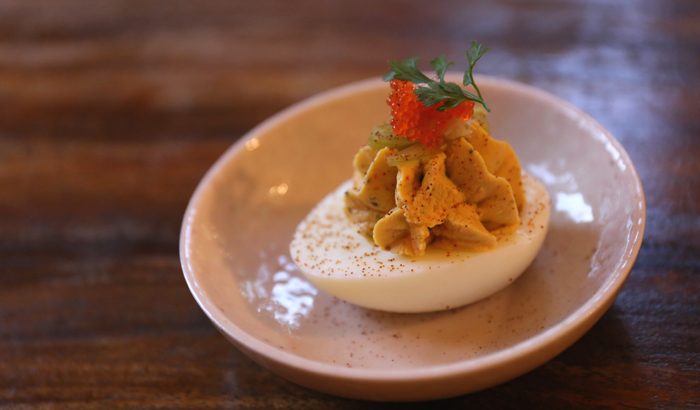 It is quaint and pretty as if it comes from the mystical world of Japanese author & film director, Hayao Miyazaki. The entrance leads into a comfortable spacious area and one’s imagination and expectations slowly expands into tonight’s restaurant story.

Various handmade “fermented food” line up the entire counter. In Japan, fermented food boom has been going on for a long time, but in Singapore, it is still relatively new and only a few chefs add this acquired taste to their menu. However, Petrina sees it differently, boldly adding fermented food to 80% of her menu. She is often termed the “Queen of Fermented Food” in Singapore and has even bagged 2 Awards of Excellence the World Gourmet Summit 2017

Dinner started with ‘Devilled Egg’ – Hard-boiled egg white halves filled with a creamy mixture made with egg yolks, dijon aioli and dill. Paired with a barramundi brandade using kuhlbarra barramundi which is salted and steamed with potatoes and blended makes it complete. The dish is then served with bokchoy pickles and garnished with chervil.

Next on the menu is “Tuna of Tartare” The tuna cubes are tossed in a cincalok (a Melaka specialty shrimp sauce) aioli with pruple Bombay onions, tobiko and topped with chopped chives. The tartare is placed atop a niboshi cracker which is made from tapioca flour, niboshi dashi, pink peppercorns and Maldon sea salt.

Next comes “Toast”. And of course, “Toast” is not just a toast, but a lovely spread of handmade ricotta cheese and plums on a multi grain (millet) bread, topped with oyster mushrooms fired on plancha, fermented iceberg lettuce with spices like juniper berry, Szechuan pepper and black peppercorns, and mushroom catsup made with fermented white button mushrooms and blaze mushrooms cooked with brown onions and then blended. The toast is then accented with shaved pistachio and watercress.

The above three dishes are the lightest “snack” among the starters in the menu, and although it is originally simple cuisine, one can enjoy the creation of a new taste that embodies the chef’s knowledge of food ingredients and cooking methods.

Continuing our menu into Small Plates, the first on the list is “scallop”.  Hokkaido scallops are cured kobujime-style, an ancient Japanese technique for preserving fish by curing it between layers of konbu and thus infusing it with umami. This is served next to a kohlrabi sunchoke puree, made by steaming and blending the kohlrabi but intentionally leaving larger chunks to give texture to the dish. The fermented kohlrabi on the scallops are made from julienned kohlrabi buried in a brown butter rice roux for about two to three weeks. The dish is finished with a drizzle of lemon oil on the scallops, shaved cured egg yolk on the kohlrabi puree, then garnished with red amaranth and micro cilantro.

‘Burrata’ is next. Featuring award-winning Caseificio Artigiana burrata in a green gazpacho, made by blending green bell pepper, Japanese cucumber, indian borage, mint and extra virgin olive oil. To accompany the dish are multigrain crostones, bok choy greens and a chayote confit with onions and fine herbs. The dish is then garnished with a blend of fine herbs.

Wild Sri Lankan tiger prawns follows after Burrata. The prawns are topped on a bed of orzo and foie gras foam, accompanied by turnip fired on plancha, pickled kaiso seaweed and fried kaiso seaweed. The dish is garnished with pea tendrils

The next dish is inspired by a Korean dish, Bossam, and features thick slices of Duroc pork belly from Spain is our next dish called “Boiled Pork Belly. Served on baby gem lettuce with sliced apple dongchimi; a winter kimchi that is usually done with white radish. The dongchimi liquid is used to make a gel-type sauce for the dish, which is also then sprinkled with red and white quinoa, and toasted sakura ebi as the original Korean bossam dish is typically served with salted shrimp. The dish is garnished with chervil.

Up to this point are featured appetizers, but the Chef Petrina’s wild and creative ideas and ability to delve deep into the history and origin of the ingredients and Asian food cultures, marrying flavours and textures in novel ways should not stop exciting dinners here.

Before the mains are carried out, we were introduced to the self-sustained garden outside the restaurant.

“Most of herbs we use are grown here. Even if you ask a merchant you may not always find what you want, so when I’m not cooking, I can be found pulling out weeds and taking care of herbs and vegetables in my garden. “Said chef Petrina with a smile as we chatted into the evening.